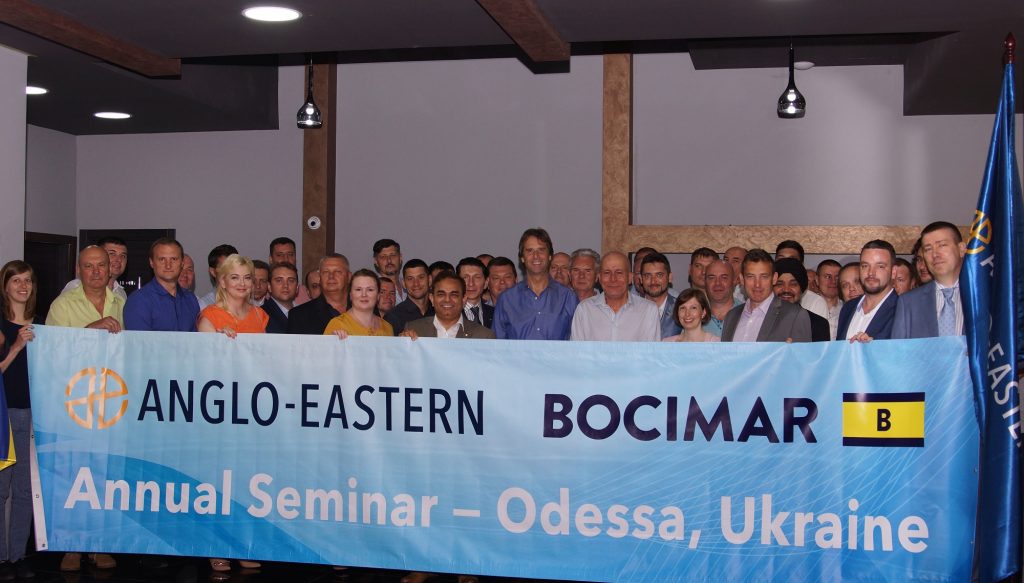 As a notable follow-up of Anglo-Eastern Seminar in Odesa, one of Anglo-Eastern Company’s key customers – BOCIMAR, featuring the EBE Company, who joint AESM fleet several years ago – organized the seminar for the Ukrainian seafarers, serving on board of their ships.

Mr. Yash Chawla Fleet Director AE Antwerp opened the ceremony by emphasizing the importance of such direct interaction between the seafarers and the shipowners. In his report later that day, Mr. Chawla focused on preparing for 2020 fuel requirements. The topic was elaborated by BOCIMAR’s Technical Manager, Mr. Lieven Van Eetvelde who spoke about scrubbers and BWTS.

At any seminar, the Open House and workshop is something all the participants are looking forward to. This time was not an exception. All 41 attending officers took an active part in raising the issues of concern, and giving a feedback on the current affairs in maritime sector.

The BOCIMAR Operation Director, Capt. Ronald de Paw was the high-profile owner’s representative who interacted with the seafarers and provided valuable insights on the number of pressing issues.

“I’m thankful to Anglo-Eastern for organizing this Seminar, – says Capt. Ronald de Paw. – This is a great opportunity to interact with all these seafarers. I’ve been working for Bocimar since 2002 and I like the professionalism of the Ukrainian seafarers.”

The workshop enjoyed a very moving and commendable moment, when Capt.  Ronald de Paw awarded Capt. Tsyganenko the Certificate of Commendation for saving people’s life at sea. This was the celebration of professional and personal traits so highly praised in the maritime community and yet again proved that people’s life is of the ultimate value both at sea and ashore.

Did you find apk for android? You can find new Free Android Games and apps.
Previous post “It is OUR Ship”: Anglo-Eastern Seminar in Odesa Next post FEDNAV Ukrainian Officers’ Seminar at Odessa