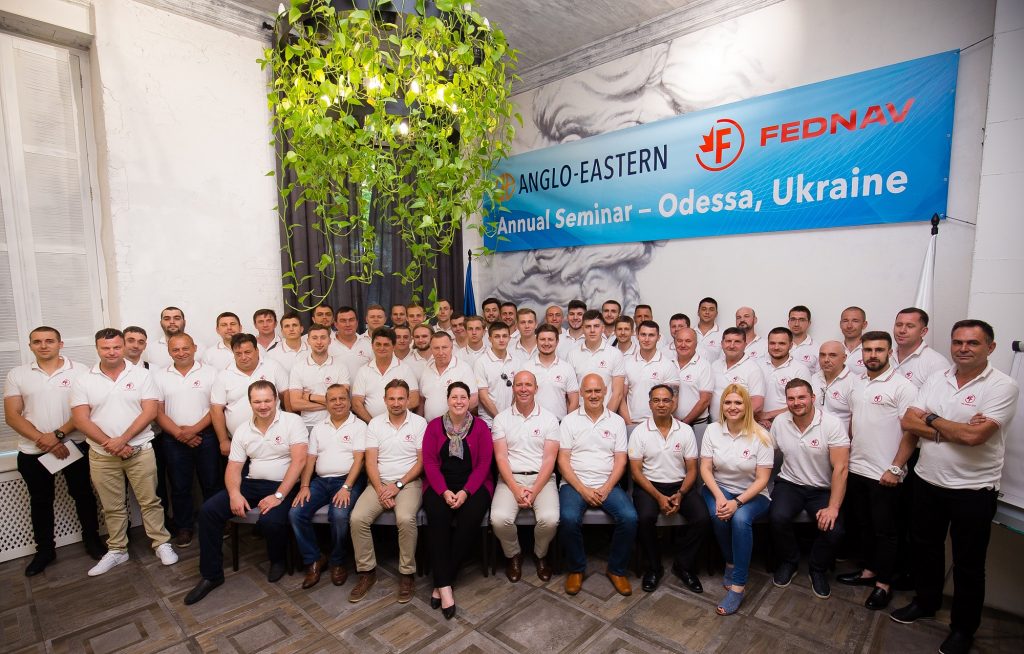 FEDNAV is one of the oldest shipping companies and Anglo-Eastern long-term reliable partner. This year, the company who is the role model for many in the maritime industry in terms of the values, integrity and efficiency, celebrates its 75th anniversary.

On the 5th of June in Odessa, FEDNAV held the seminar for Ukrainian seafarers serving on board of the Anglo-Eastern  vessels.

“The FEDNAV seminar continues the idea promoted at Anglo-Eastern seminar “This is OUR ship” we had the day before. We have one goal – safe and efficient operation of our vessels, protection of marine environment, and zero accident. And such seminars contribute greatly to shaping us one team who take every effort to fulfill this goal”, says Capt. Oleg Lukyancheko, Director of Anglo-Eastern Ukraine, who opened the event.

The event attendees  were really impressed when they, also, were addressed by the FEDNAV CEO Paul Pathy in his video record. The Company’s CEO thanked Ukrainian seafarers for their work and wished them successful  and efficient seminar.

Mr. Martin Kraft, FEDNAV’s Vice President, Shipowning and Technical Services is a great believer in the concept of “One Team – One Goal – One Communication”, too. His presentation, among other issues, looked at more open communication and delivering on Owner’s high standards. Mr. Kraft emphasized that  people would always be in the center of the industry and navigating the increasing number of complexities of the modern market requires strong partnership with AESM, Class, Oshima shipyard and other stakeholders.

Mrs. Sarah Norgaard,  Senior Fleet Operator, Arctic Operations and Projects, presented FEDNAV fleet and Arctic operations review 2019. What evoked a great interest among the seminars attendees is that Mrs. Norgaard mentioned the increased opportunities for Ukrainians onboard m.v. Nunavik, following the placement of Ukrainian Master on this vessel.

Mr. Tom Cardon, the Assistant Manager , Fleet Operations spoke about current market condition and the trends observed for the handy-sized ships. He also summarized the tips on how the ship’s staff can make a difference by saving ship’s time, fuel, maximum cargo lifts etc.

The Open House was the most anticipated part of the seminar – and it for the reason, as it was impressively productive interaction between the owner, the manager, and the seafarers. The feedback the Anglo-Eastern Ukraine’s office received  from almost 50 sailors, including officers and the cadets, proves that the communication, exchange of opinions, comments and remarks were extremely valuable, insightful, and offered in a positive manner. It created an extremely involving and productive environment.

One of the key issues brought to light during the seminar was the FEDNAV cadet programme. It is a company’s  long term strategy of attracting and retaining top talent and promoting /supporting the maritime industry in India, Ukraine and Canada. Such stand sounded very encouraging to the 10 cadets attending the event. They admitted they aspire the long-lasting cooperation and career at FEDNAV as internationally acclaimed shipping company  and they are delighted to have an opportunity to take part in the company’s cadet programme.