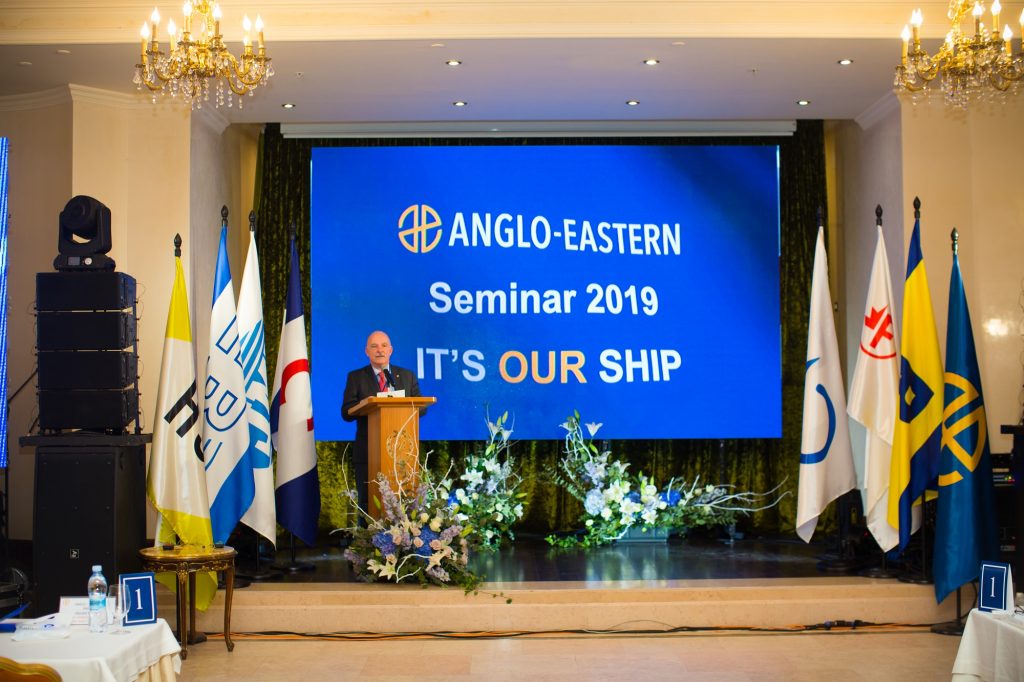 “It is OUR Ship”: Anglo-Eastern Seminar in Odesa

Anglo-Eastern Company Seminar in Odesa becomes one of the major highlights for the Company’s seafarers from Ukraine. This year was a no exception.

“Every year, the Company’s seminars have different topics. This year, we called it “It’s OUR ship”, and the main message from most of today’s speakers was “One team, one goal”, says COO (Dry Ships Division) Mr. Harald Klein. He welcomed the seminar participants and emphasized the importance of open and honest communication between the staff aboard and ashore.

Capt. Oleg Lukyanchenko, the Director of Anglo-Eastern Ukraine pointed out, “The seminars bring together the Company’s management, the shipowners, and the seafarers. This is an excellent opportunity for them to communicate, exchange their opinions, and receive the feedback on many important issues. This event has become our regular activity and it has proved to be remarkably effective and useful. “

Indeed, for over a hundred thirty of Ukrainian seafarers, who attended the seminar, it was a unique chance to hear the important update on the most pressing challenges maritime community as a whole and Anglo-Eastern in particular is facing today. Owner representatives from Bocimar, Fednav, Hadley were also there to interact with their respective officers and to conduct their own seminars.

Capt. Pradeep Chawla, Managing Director (Group QHSE &Training) brought to the spotlight the Company’s statistics, which shows the continuous positive trend in all the aspects. He specifically focused on Ukrainian seafarers whose number in the Company’s pool has been increasing continually during the recent decade. Capt. Somasundar Nair presented the manning reviews and spoke about health and well-being of the seafarers. He placed particular emphasis one of the major issues of concern in the world’s maritime community – seafarers’ mental health. Capt. Gurbinder Tiwana, Senior Manager – Operations, focused on the incidents and requirements at Australian ports.

The engineers also received their fair share of most recent updates on the challenges their department may face. The Fleet Directors of Anglo-Eastern Antwerp and Glasgow offices – Mr. Yash Chawla and Mr. Declan Brookes provided the analysis of most illustrative engineering case studies. And Mr. Vladimir Katuna, Senior Training Superintendent of Anglo-Eastern Ukraine, provided the overview of Sulphur 2020 requirements.

The Open House – the most interactive and thus most anticipated part of the seminar for the seafarers and Company management – was highly productive and exposed the proactive position of the officers on many relevant issues of their work.

Traditionally, the Anglo-Eastern Seminar in Odesa ended with the spectacular show accompanied by cocktails and dinner, where the Shipowners, Company’s management and the seafarers with their families had a chance to interact in a less formal cheerful environment.